Waaaaaaay back earlier this year, the heavens decided that my little part of the fetid taint of Hell needed to exit the current drought and all of Nature conspired to Make It So. This, I took as a not-so-direct way of the Universe allowing me to view and review some of my more glaring defects of character by trapping me within the confines of Cat’s Paw Acres and the Alumi-Turd 2000. 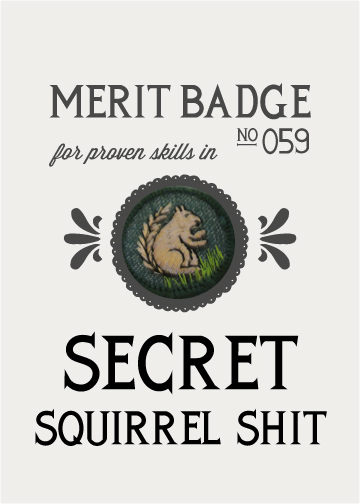 Enter the saving grace of a fellow author and friend Cherie Noel and the Super Sekrit Squirrel Project. (Named because once I get cabin fever, it is not that far of a stretch for my psyche to become nuttier than squirrel shit.) Since those early days, my beloved co-author has placed the onus of the Super Sekrit Oath of Shut-Upped-Ness upon me and our joint foray into published proof of mental instability lest I invoke Her Wrath Almighty. (What the Hell do I know? This woman lives in upstate New York, and I figure that the only thing crazier than someone who lives in Central Texas and COPS to it, is someone who can claim French speaking Canadian Yeti’s as relatives!)

Thus, the fervor of Hint Dropping. Which, I have on good authority, is “supposed to make waves stronger than a large turd from a tall cow.” Again, I will claim willful ignorance. It’s safer.

There are those of you who KNOW that I have the reputation to drop metaphors so colorful they could show up a Pride Parade. Likewise with the creative adjectives of cussing. But, this Oath of Shut-Upped-Ness?

Shit Fire and Save The Matches. This is harder than keeping your virginity at the Senior Prom and every available candidate to do the dirty with is not only available, but has been the subject of ‘those’ dreams for weeks.

Almost makes me glad I’m not Catholic. (Seriously, my imagination and the resulting confessions would have driven some priests into taking a vow of silence in a desolate monastery far, far away!)

As in, “he’s gonna be Celtic Dragon Mama Poop” verra, verra soon. Or I MIGHT recycle his little nut sack as a bladder for the World’s Smallest Bagpipe…

Ah, the joys of planning his demise. In the meantime, let me just say that the Hint Dropping shall commence like mulberry fueled bird shit – It Shall Leave Stains Upon Thine Memory. <Insert evil laugh here.>